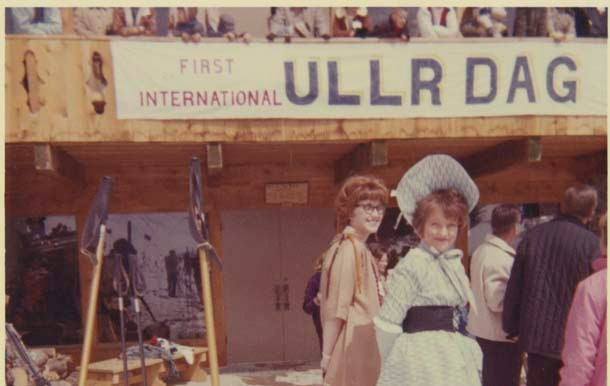 Breckenridge’s first winter carnival, Ullr Dag, had a tall order to fill: make Breckenridge stand out. Breckenridge was just one of many new ski areas in Colorado in the early 1960s, and the first season wasn’t very successful.

In fact, it was such a bust that the owners changed the name of the ski area and started over again for the 1962-63 season. A celebration was called for. But how to differentiate Breckenridge’s winter carnival from the slew of traditional carnivals around the state?

Enter the Norwegians and a cast of youthful enthusiasts who hitched their dreams to the nascent ski town of Breckenridge. Crazy, outlandish, wild ideas made the Ullr Dag festivals unforgettable.

Norwegians Trygve Berge and Sigurd Rockne came to Breckenridge to start the ski school, and brought Norse mythology with them. Ullr, the Norse god of winter and patron of skiers, inspired the theme. Breckenridge’s historic No Man’s Land Celebration provided the background to establish Breckenridge as a Kingdom. The ideas flowed from there. A Kingdom needed a king and queen, its own currency, and visas to enter. Traditional winter carnival activities such as a parade, torch light procession, and a dance provided enough familiarity to keep the event grounded in a semblance of reality. Ullr Dag (Ull’s Day) was on.

The first goal: attract attention. Brilliant marketers burst into a Town Council meeting to demand a return to the Kingdom, setting the stage for the event. Rugged men ski jored from Breckenridge to Denver to invite the governor to be the first King of Breckenridge. Talk of secession attracted the scrutiny of the U.S. Attorney General.

When the U.S. Treasury Department demanded that Ullr Dag event organizers stop minting their own coins for circulation during the event, the press took notice. The people of Breckenridge couldn’t pay for that kind of notoriety. “We minted coins which was against the law,” said Bob Atchison, public relations manager for the Breckenridge Ski Area in 1963.

Intrigue between rival ski areas surfaced with the saga of the Ullr coins. Someone reported Breckenridge to the U.S. Treasury Department. Coin souvenirs, along the lines of Ullr talismans, were common swag at Colorado events. Robert Theobald, attorney for the event, reminded Treasury officials that many other places issued these coins and “there had been no holler at all.” Treasury admitted that the law in this matter was rarely enforced, but someone registered a protest. “Some person is pressing this matter very hard,” quoted the news article. Theobald noted: “somebody’s trying to make trouble for us.”

The offending coins were swept up and stamped with “not” and “souvenir.” Those coins that escaped the alteration are valuable collector’s items today. No one knows who lodged the complaint with the Treasury Department, but local rumors place the blame on a nearby ski resort, which just happened to plan their grand opening celebration on the same weekend as the first Ullr Dag. If true, their protests backfired. Breckenridge garnered even more attention as a result of the dust-up.

If Breckenridge was in trouble, it was good trouble. Attention was piqued for the first Ullr Dag. How could the event possibly live up to the promise inspired by the outlandish introductions?

Crowds of curious tourists came to the first Ullr Dag to see what all the fuss was about.

Arrival in Breckenridge required the purchase of a visa for twenty-five cents at the two points of entry: Colorado State Highway 9, also known as north and south Main Street (Park Avenue did not exist in those days).

Shriner clowns handled visa sales and vehicle management. In famous Shriner fashion, cars were positioned in a zig-zag that completely blocked traffic. But one car was strategically placed, like a keystone, and “if that one car could move, the whole thing would release” remembered Debbie Cope Lee and Sheila Cope Sargent, whose father was one of the Shriner Clowns.

One tourist from Minnesota on his way to Aspen got caught up in the mayhem. He was so incensed by having to purchase not just one visa on his way in to town, but a second on his way out when he realized the error of his route, that he wrote a letter of complaint to the Denver Post. Robert Giles groused that “it was an extremely poor form of advertising…and reflected negatively on the state in general.” More bad press for Breckenridge didn’t dampen spirits, nor alter Ullr Dag; the visa requirement continued every year that Ullr Dag existed.

Failure to purchase a visa resulted in a visit to the “hoosegow,” a loose form of jail in one of the local bars. Costumes were required throughout the event, and failure to comply resulted in the same punishment.

The entire town got into the spirit of Ullr. Businesses decorated their store fronts. The first “snow sculpturing” contest offered visual delights. The Cope sisters remembered the Viking ship constructed of snow at the entry to their father’s drug store (now Skinny Winter gifts). “You had to walk through the ship to get into the store,” they recalled.

Ullr Dag kicked off on the evening of Friday, March 22, 1963, with fireworks from the top of Peak 8, followed by a torchlight parade down the ski runs. The Fire of Ullr illuminated downtown. Attention shifted to Main Street at 7:45 p.m. for the first ever Ullr Dag parade. Long-timers remember that it was a rinky-dink affair with just a few floats. In the dark, they were probably hard to see. No wonder there are no known photos of the first Ullr Dag parade.

Opening ceremonies commenced on Saturday morning at the Court House on Lincoln Avenue, followed by silly ski races at the Breckenridge Ski Area. Trygve Berge exhibited his famous forward flip on skis at the Bergenhof at lunch time. Activities in town included ice skating performances and a professional clown act.

As darkness descended, the torchlight parade repeated its journey down the ski runs. A busy day of fun and frivolity concluded with the official Royal Ball and coronation of Governor John Love and his wife Ann as the King and Queen of Breckenridge.

Sunday’s activities harkened back to the original Breckenridge Winter Carnival, held for the first time only the year before, with dog sled races and ski joring on French Street. The Breckenridge Volunteer Fire Department sponsored the carnival events.

Descriptions of the first Ullr Dag enthusiastically promoted its continuance. Decades later, in their recordings for the Breckenridge Oral History Project, long-timers still remembered. “Such a wild and hysterical time,” recalled Kay McGinnis. “The most wild few days,” reminisced Bob Atchison. “Craziness,” said the Cope sisters. “It was so much fun.”

Over the years, Ullr Dag evolved. The parade time changed to daylight hours. The 1964 Ullr Dag introduced a beard contest. In 1965, Ski-Doo races were added. In 1966, super-sonic jets swooped over to start the parade and the Koshare Indian Dancers performed. Governor Love reprised his role as King John I several times. Larry Raff portrayed Ullr consistently throughout the years. Every year, more people attended Ullr Dag. The goal of promoting Breckenridge worked.

Dark clouds on the horizon appeared with the 1966 Ullr Dag. A vague reference in a newspaper editorial pointed to “problems with the kids.” Minor destruction and apparent under-age drinking that year foreshadowed the debacle of the 1967 Ullr Dag that resulted in the end of Ullr in Breckenridge. Over a decade would pass before Ullr was invited to return to his Kingdom.

Read more about the Origins of Ullr and the End of Ullr Dag at the Breckenridge Heritage Alliance blog site. For more resources on the history of Breckenridge, visit the website or historic site or exhibit, or take a tour.