Breckenridge, CO: The Origins of Ullr

Breckenridge’s Ullr Dag festival was conceived in creativity and dedicated to the proposition that all are entitled to a weekend of merry-making. In 1963, the people of town proclaimed Breckenridge as a sovereign nation and celebrated Ullr Dag as a tongue-in-cheek attempt to secede from the United States and establish the Kingdom of Breckenridge. How did this wacky idea come about?

Yet Ullr Dag (Ull’s Day) Festival could not be an ordinary winter carnival. “It is uniquely Breckenridge,” remembered long-time resident Sigurd Rockne, one of the founders of Ullr Dag.

“It was definitely the Norwegians,” recalled Bob Atchison, the first public relations professional hired by the Breckenridge Ski Area. Ski Area founder, Bill Rounds, recruited Trygve Berge and Sigurd Rockne from Stein Erickson’s ski school at Aspen Highlands to Breckenridge. The first ski season was so quiet, the ski area owners realized they needed to make a big splash the second year to bring attention to Breckenridge. A winter carnival was the answer. As Trygve Berge tells it: “I started it! With Sigurd and my sister from Norway, she was here visiting. A Swedish lady named Britta, too.” Britta Wolfram was Bob Atchison’s secretary.

Berge credits part of his inspiration to Aspen’s carnival, Winterskol, started in 1951. Bente Larsen Godal, a friend of Berge’s and one of the Norwegian ski instructors recruited to the new Breckenridge, was crowned Winterskol queen in 1959. Berge, Rockne and the other Norwegians imported the winter carnival tradition to Breckenridge.

Sigurd Rockne expanded on the origin: “…everyone jumped on the idea, added to it and loved the whole idea. David Bruns came up with the Ullr coin idea. Someone came up with the idea of the bonfire to burn up Christmas trees.”

Just as the popular Scandinavian smorgasbord offers an array of delectable treats, Breckenridge’s most creative citizens contributed ideas to create an unforgettable event.

While credit for the genesis of Ullr Dag goes to the Norwegians, Chamber of Commerce members seized on the concept the Norse god of winter and dreamed up the wacky notion to make Breckenridge a Kingdom. Rockne acknowledges Dick Jagoda as the artist behind the original Ullr logo. Jagoda’s most famous contribution carries forward to today’s Ullr Fest celebrations, the horned hat.

Experts in Norse mythology claim that little is known about the Norse god Ull (Ullr is the possessive form). According to Professor Jackson Crawford of the University of Colorado, Ull appears in The Poetic Edda only briefly. Ull is best known across Northern Europe from the many places named in his honor. In Voss, Norway, Rockne and Berge’s home town, a well-known farm is called Ullestad, Ullr’s Place.

While not a famous god, Ull was very familiar to the cool crowd who embraced the ski culture in Europe and brought it to the United States in the late 1950s. As the Norse god of winter and patron of skiers, Ullr talismans were ubiquitous. Zipper pulls, belt buckles, pins, and patches adorned with Ull were worn by everyone. The figure of Ull helped establish a common identity among skiing pioneers in Europe. If you knew Ull, you knew skiing. Trygve and Marilyn Berge sold Ullr zipper pulls in their Norway Haus Ski Shop on Lincoln Avenue in Breckenridge.

The Norse god Ullr himself was known to be handsome, an excellent archer and winter hunter. In one of the few written accounts, Ull was “so good with skis that no one can compete with him.” Thus was born the “first festival ever to be held in honor of this ancient god… and appropriately named the Ullr Dag Winter Festival” announced the Summit County Journal.

Seizing on the idea of Breckenridge as a No Man’s Land, the Ullr event originators turned the idea on its head. Breckenridge was never part of the United States and still was not to that day, they claimed. Breckenridge was a sovereign nation, entitled to mint its own currency, crown its own leaders, and require a visa to enter the Kingdom. No winter carnival in Colorado could compete for uniqueness and creativity.

Everything about the first Ullr Dag in 1963 aroused attention for the little ski town, starting with the announcement of the event. In a brilliant marketing ploy, a group of “bearded men,” followers of Ullr they said, burst into a staid Town Council meeting, demanding that the council hear their protest. “Breckenridge was a free, sovereign and independent kingdom… Then in 1936 you found this out and messed things up… It was wrong then, and it’s wrong now,” the local newspaper quoted under the headline: “Council Meeting in Turmoil.”

Local turmoil was not enough. Breckenridge needed the attention of the state. Exhibiting great physical endurance, followers of Ullr ski jored (behind a truck) all the way to Denver and the State Capitol to the office of then-Governor Love. Exhausted and beat up by the journey, they invited John Love to become King John I, the first King of the Kingdom of Breckenridge. He accepted. 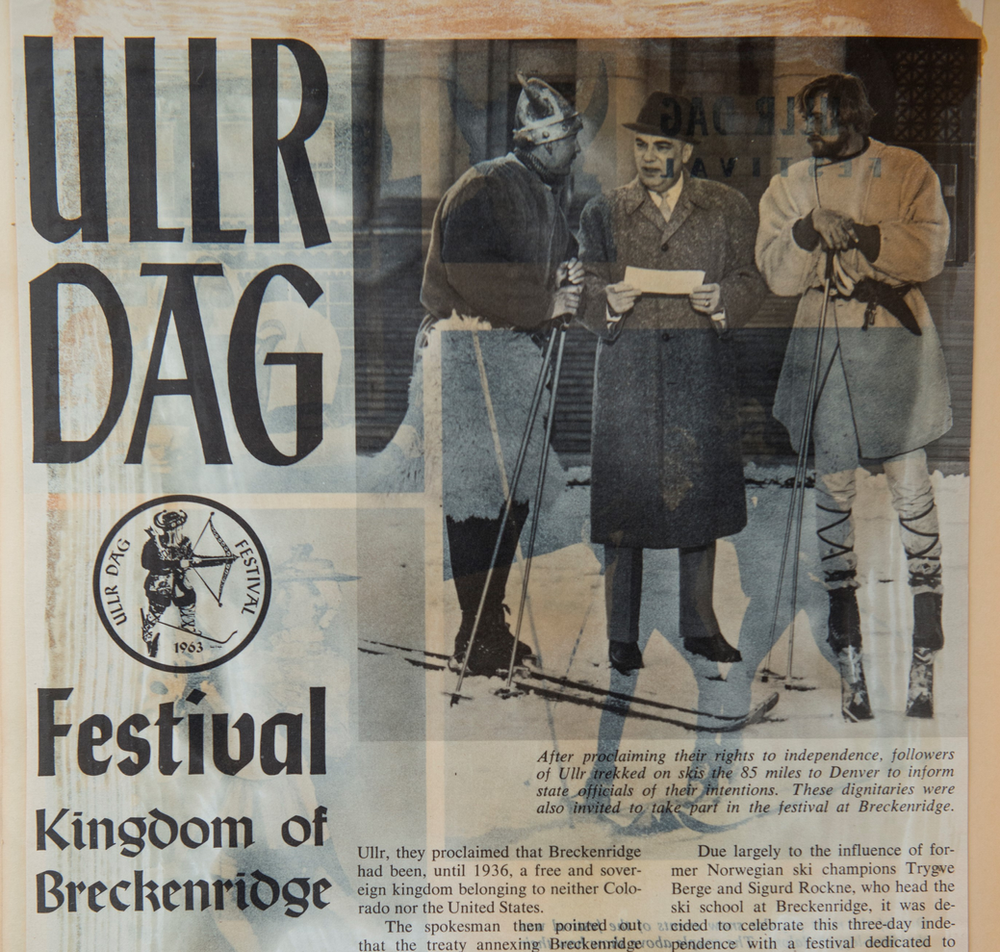 Governor Love’s law firm played along. A “legal opinion” presented to the town council supporting the notion of a Kingdom rested entirely on a pre-feminist argument that there was “no historical precedent for a bunch of women… attempting to do it to the exclusion of men” (reunite the No Man’s Land of Breckenridge with the United States, that is). “It appears, therefore, that Breckenridge is still a sovereign state.”

All the talk of secession worked in the town’s favor as well. Breckenridge generated so much publicity for its many stunts to secede from that nation that then-U.S. Attorney General Robert Kennedy expressed enough concern to inquire about sending help.

The people of Colorado took notice of Breckenridge. The first Ullr Dag Festival in March 1963 was a raging success.

Read more about the first Ullr Dag Festivals and the end of Ullr Dag at the Breckenridge Heritage Alliance blog site. For more resources on the history of Breckenridge, visit the website or historic site, visit a museum, or take a tour.