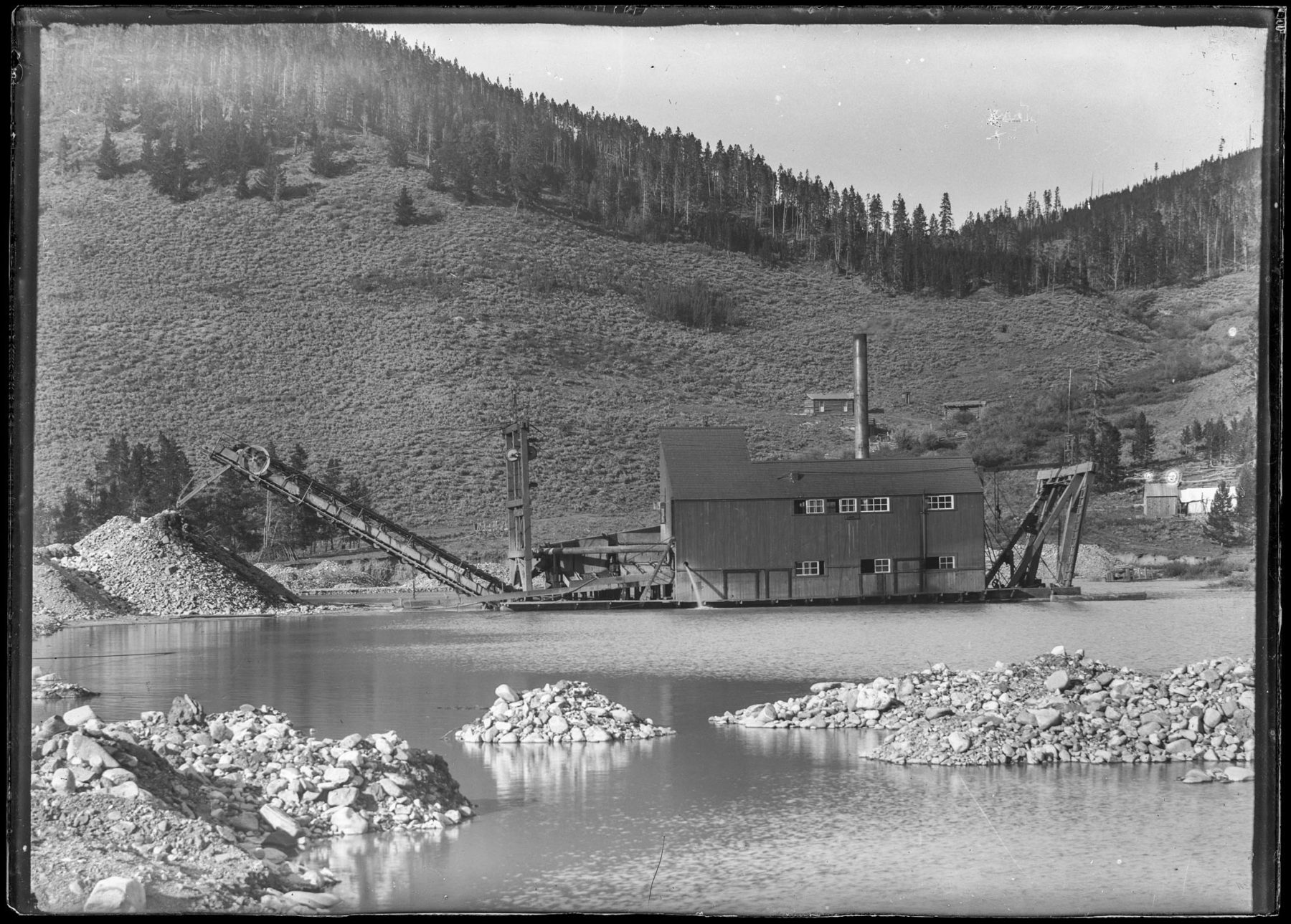 Breckenridge and southern Summit County experienced three mining booms.  The first, lasting from 1859 until the mid-1860s, brought prospectors who looked for the “easy” gold–the nuggets in streams, the pieces laying on the ground and buried in shallow soils on the hillsides.  They used pans, rocker boxes, long toms, and later high pressure hoses called “giants” to wash the gold-filled soil into sluice boxes.  The second boom, the hard rock mining boom, began in the 1870s.  Rather than the individual prospector chasing his dream, companies hired miners and others to work the mines.  The third boom, fueled by nine gold dredging boats, began in 1898 and lasted until 1942.  This is their story.

Dredging, the mining method using the greatest amount of technological expertise and energy and causing the most environmental damage, literally turning the waterways upside-down.  Helen Rich, a Breckenridge,author, described it this way:

“The dredge squats on a brown-green pond, and wherever the dredge goes the pond goes, too.  The water comes from a near-by mountain creek and it is clear when it flows into the pond, but not after that.  A gold boat looks like a prehistoric monster.  It has a deck the same as any other boat, but at the bow there are gawky neck-like timbers called gantries.  They support the bucket ladder, and the bucket ladder holds the digging buckets.  Amidships is a lower hump covering the machinery.  This machinery acts like a stomach.  It takes gold for its food and spews out what is doesn’t want.  This residue goes out on a conveyor belt covered with white canvas.  All day long, all night long, the conveyor belt carries everything that isn’t gold up the stacker and lets it drop.  Splat.  Plop.  As the monster lumbers forward it leaves behind tailings piles higher than a two-story house.”

Ben Stanley Revett brought the first dredge boats to Breckenridge in 1898.  A total of nine gold dredges scoured the streams of the county, seven of them bearing the imprint of Revett.  The dredges enjoyed a varying amount of success often depending on the size of the boat:  the first three–not successful at all; the fourth– moderately so.  Three others enjoyed success:  one very successful and two extremely successful periodically, averaging as much as $1,000 per day in retrieved gold.

Dredging for gold began in New Zealand as early as 1857.  From there, the idea came to the United States.  Revett first studied dredging in Grasshopper Gulch, Bannock, Montana, in 1894.  Seeing the success of dredging in Montana, he purchased and leased dredging ground along the lower Swan River for his operations.

Construction always began with a large pit that would eventually be filled with water to float the dredge.  The wooden hull rested on stilts or on cribbed logs stacked several feet tall.  Some of the companies, at this point, filled the pit with water to float the hull.  Workers next installed the equipment and built housing to protect the machinery.  Other companies built the housing on the hull first; then filled the pit with water, and finally installed the equipment.

To steady the dredge as it excavated the gravel, thick wire cables called tenders, found at the four corners of the dredge, stretched to the shore where they wrapped around a “deadman,” a huge log buried about three feet deep and held in place by large boulders.  Later dredges had two spud poles at the rear of the boat.  First made of heavy wood and later of steel, workers rammed the spuds into the river bed to provide further stability.  In addition, these spuds could be used to help turn or pivot the dredge, giving the dredge piles their characteristic curved shape.

Late in 1897, Revett ordered the machinery for his first two dredge boats from the Risdon Iron Works of San Francisco. They measured 96 feet long and 30 feet wide with buckets of three cubic feet capacity.  These steam-powered boats, which burned wood for fuel, could dredge 2,000 cubic yards of gravel each 24 hours of operation.  The company dismantled both because their buckets could not reach the gold at bedrock on the Swan River.

Revett contracted for two new dredge boats in 1899:  one from Risdon Iron Works and one from the Bucyrus Company of South Milwaukee, Wisconsin.  The third dredge suffered the same fate as the first two Risdon dredges.  The Bucyrus dredge began working in August, 1899.  Heavier and larger, 110 feet long, steam-powered, with a capacity of 2,500 cubic years for each 24 hours of operation, it successfully reached bedrock.  It worked the Swan River from 1901 until 1904.

The eighth dredge, the Reiling dredge, operated in French Gulch from 1909 until 1920.  The French Gulch Dredging Company, with H.J. Reiling as president, secured leases on properties along the waterway.  Reiling purchased 200,000 feet of Oregon fir for the dredge.  Operations began in the spring of 1909.  The first clean-up in May, performed after just six or seven days of operation, resulted in about $9,000 in gold.  After another similar clean-up, the company sent $13,000 to the mint in Denver.  This and the Reliance dredge, both quite successful, retraced their paths in French Gulch until profits dropped drastically.  Their combined total probably reached $4.2 million; $1.8 for the Reiling dredge alone.  That $4.2 million would equal about $375 million today.

The remains of the Reiling dredge rest in the pond where the dredge “died” while working the gravels of a stream bar.  The inner workings and machinery were removed and the remaining metal salvaged in 1942 for the war effort.  Snow and lightning have taken a toll on the wooden housing and hull.  In 1911, the Breckenridge Heritage Alliance erected interpretive signs at the Reiling dredge site and constructed pathways to the sight from the French Gulch Road.   Subsequent projects have stabilized the remains.

The ninth dredge, built by the Yuba Dredge Company of California, operated on the Blue River.  Reaching 130 feet in length and 42 feet, 8 inches in width, with 87 buckets, each holding eight cubic feet of gravel, it had a capacity of 4,000 cubic yards for each 24 hours of operation. It ceased operating on April 13, 1938, when the Stearns Investment Company foreclosed on the mortgage of the dredge.  The owners dismantled the dredge and moved it to Fairplay, in South Park County.

Most people consider the dredge piles, those huge mounds of round rock still visible in the valleys of the Swan and Blue rivers and in French Gulch, an environmental nightmare.  Others look at them as a reminder of the great dredges and their ability to keep Breckenridge alive for so many years when very little mining supported the economy of Summit county.

They had voracious appetites for fuel and gravel.  The first dredge boats needed a steady supply of wood for fuel.  Later models used coal and then elelctricity.  Succeeding boats increased in size and in dredging capacity.  The first ones, which proved too small, measured 96 feet long and 30 feet wide.  The last hull built stretched 130 feet by 42 feet, eight inches.  The first two dredge boats digested 1000 cubin yards of grave for each 24 hours of operation’ later models precessed up to 5,000 cubic yards.

Dredge operations would not have been possible without the railroad.  The Reliance dredge in French Gulch, weighing 5,000 tons when completed, required 40,000 feet of timber from Oregon to construct.  Its boilers weighted 11 tons each.

The biggest problem with the dredges was their inability to reach bedrock where the gold had collected for centures.  Bedrock depths varied from place to place; just over 40 feet in the Swan River; well over 50 feet in parts of the Bluie River.