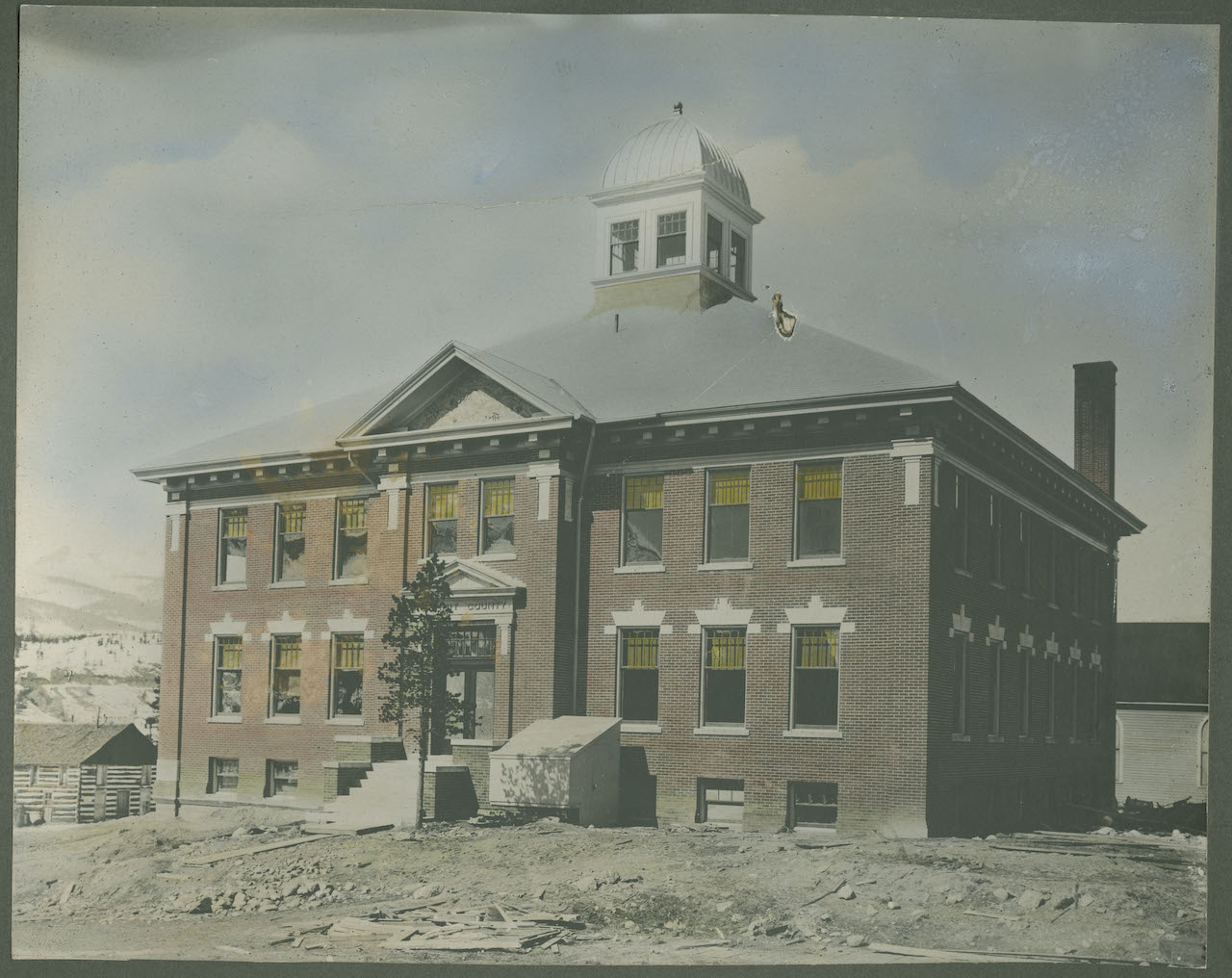 When the first prospectors and miners arrived in what would become Summit County, no legal or governmental structure existed–no federal, state, county or town governments, no sets of laws–to guide their interactions.  This lack of a structure presented problems.  How did one file a claim?  How did one keep others from stealing that claim?  How could disagreements be settled?  To alleviate the problem, miners and prospectors adopted an idea used in California–the mining district.

A mining district, based on a specific geographic area, included all of those who owned a claim in that area.   At an assembly of claim owners, the men elected a president and a secretary/recorder.  They established bylaws that defined mining practices as well as civil and criminal matters.  An elected sheriff enforced the laws of the mining district.  The bylaws outlined how a claim should be staked; an individual’s right to mine or sell that claim; and the amount of work that must be done in a certain time period to retain ownership of the claim.  The secretary recorded all claims.  In legal disputes, the mining district president appointed a jury and perhaps persons to act as representatives of the various sides of the dispute.   Often the president acted as judge.  At a public trial, the opposing sides presented their case and the jury made its decision.  In criminal cases, such as murder, claim jumping, and horse rustling, justice was swift and decisive.

Pre-Breckenridge had four mining districts:  the Miners district (the first, located near the confluence of Indiana Creek and the Blue River) and the Spaulding, Independence and Pollack districts, established in the fall of 1859 and extending from about the present-day City Market to a point south of town.

The differing laws in each district caused confusion and instability leading to lawlessness and vigilantism.  Incidents of lunching, flying bullets, gun fights, claim humping, horse stealing, and robbery called for a more formal system of government.

Merchants needed stability to thrive. Residents wanted good roads, protection from crime, and safety from destructive fires.  Out of these needs grew town governments, offering stability and protection.  From the beginning, a mayor and board of trustees led the Breckenridge town government.  Most Rocky Mountain mining towns and camps adopted this form of government.  Partisan politics ruled.  Republicans voted for Republicans; Democrats voted for Democrats.  Only rarely did a board of trustees deviate from the expected outcome.

Most early miners had little use for local government but the need for fire protection and good roads tempered those feelings.  Structures built of wood dried out immediately in the dry summer weather.  The scarcity of water especially in winter and supplies of dynamite posed constant hazards.  Towns enacted ordinances that the fire marshal enforced:  ladders on roofs, water barrels at the corners of buildings, metal plates under stoves, and metal collars around stove pipes.  Merchants could not sell gunpowder after the lamps in town were lit; nor keep more than 100 pounds of gunpowder or three barrels of kerosene or other explosive oils at a time in a store.    No one could bring a lighted candle or lamp into stables or barns.

Breckenridge had its share of wild dogs, a common problem in mining towns and camps.  Owners needed to purchase a license for their dogs.  The designated person, often the marshal, could shoot unlicensed dogs on sight.  The newspaper editor wrote that “a half pound of lead” would “eliminate a half ton of dogs on Main Street” and it would be a good investment.  Even as late as 1910, dogs created problems:  a pack of roving dogs raided the Briggle’s hen house on Harris Street.

The streets commissioner and his crew performed very necessary tasks.  Maintaining the roads always presented difficulties.  Streets were snow-covered in winter; muddy in spring; and dusty in summer.  The newspaper editor commented often about the work the commissioner performed:  Commissioner Kingsley did a “fine job removing the boulders from Ridge Street and Lincoln avenue, but Washington Avenue in front of Ford’s Restaurant still needed work.“   Sometimes the streets commissioner enlisted the aid of the townsfolk, asking them to do their part by removing glass, tin, wire, and cans from the streets so animals passing through would not be injured.

The town hired its first marshal, Sam Blair, in 1881.  He and those who followed faced a wide variety of situations–some terrible, some humorous.  The fact that they hoped to be re-elected, and often were, shows that they served well the peaceful and law-abiding residents of Breckenridge.  Soon after Blair’s election, he faced Walter Coleman, the victim of too much “bug juice,” who fired a “murderous looking” Colt revolver on Main Street near Lincoln Avenue.  Blair promptly arrested him and “assigned him to the cooler.”  Town trustees played politics with the election of Eugene Owens but congratulated Marshal Chamberlain who “put a police victim to good use in clearing the accumulated snow from the sidewalks in front of vacant and tumble-down properties.”

Ernest Conrad, a former marshal, and Sumner Whitney, owner of the Senate Saloon in Kokomo, lost their lives in a shoot-out with the Pug Ryan gang after the robbery at the Denver Hotel.  John Dierks and others died in the Little Corporal mine on Gibson Hill when their mining operation released “stagnant, foul and rank poison” air into the tunnel where they worked.

The board of trustees asked Marshal William Reeder to strictly enforce the ordinance against stock running at large in the town.  The many fences around residences lining the streets of Breckenridge served a real purpose.  On another occasion, Reeder used “kind words” to prevent a distraught Tom Wintermute from committing suicide in Valley Brook Cemetery following his wife’s death.  Unfortunately, Wintermute tried again by drinking a bottle or morphine and succeeded.

Marshal Hiram King arrested Dr. Joseph Condon for killing John Dewers, a well-known saloon proprietor, on Main Street.  Both Condon and Dewers enjoyed the respect of town residents.  The doctor’s office occupied the second floor of the building on the southwest corner of Lincoln and Main.  Dewers built his new saloon on the northwest corner of Lincoln and Main.  Formerly good friends, the two “fell out” over a “never-proven” affair between Mrs. Dewers and Dr. Condon.

Despite the tragedy, King had a sense of humor.  The newspaper reported:  “A few nights ago, the marshal of Breckenridge arrested a sleepwalker who had wandered away from home in his night clothes.  On arousing from this slumber, the prisoner queried, ‘Surely you are not going to lock me up, I can’t be responsible for the condition you found me in.  I am a somnambulist.’ ‘I can’t help what church you belong to,’ replied the marshal, ‘if you belong to every church in town you still can’t walk the streets of Breckenridge in only your shirt.’ “

Despite an uncertain future an economy based on precious minerals offered, the elected officials of Breckenridge guided the town through the ups and downs, the booms and busts the town endured, all the while attempting to provide a stable background for the growth and stability residents desired and financiers required before investing in Summit County’s mining enterprises.