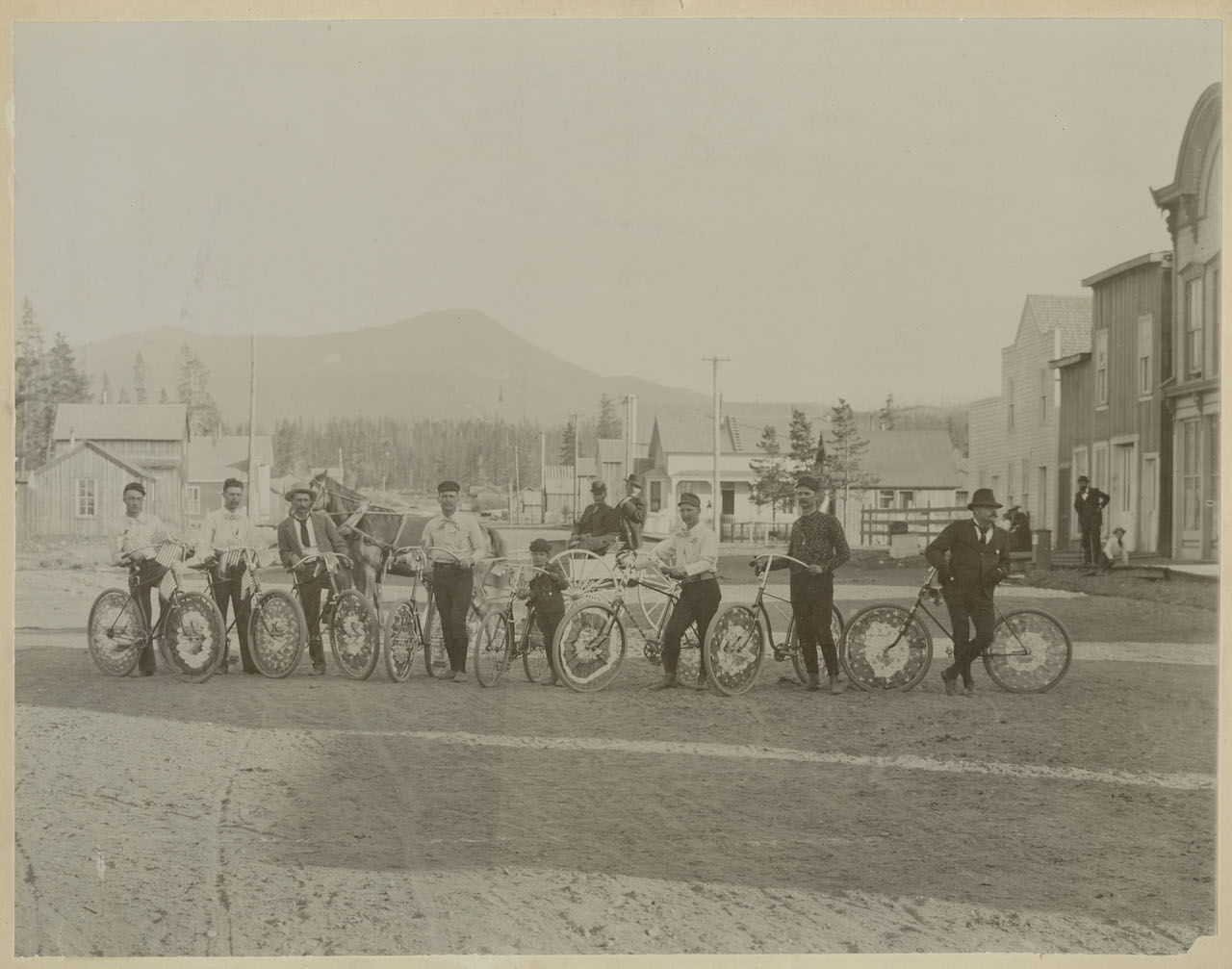 Men, women, and children in Breckenridge faced lives of hard work and danger.  Long hours laboring in mines or hauling freight over muddy, rutty roads–cooking, cleaning, sewing, or managing boarding houses–helping fathers on a farm or in a store or mothers with housework–all left little time for recreation but “recreate” they did–summer and winter, indoors and out, individually or with others.  Skiing, ice skating, hunting, cycling, fishing, card games, dancing, singing in choral groups, participating in club activities, hosting dinner parties and other social events–all provided respite from daily life.  White glove social events like concerts and lectures entertained residents, as did costume balls.   As an added benefit, wholesome recreational endeavors occupied youthful minds and attempted to keep young men out of saloons and bordellos.

The long, cold winter months meant that many brave souls enjoyed ice skating.  A 60-foot tent over the frozen Blue River provided sheltered skating in 1883.  Skates that clipped onto shoes and were held in place by straps arrived from Denver.  These “first class” skates could be rented “for low prices” by the hour.  Local musical groups played nightly.  The newspaper editor followed the events at the rink:

“The Skating Rink is all filled up for the reception of Jack Frost.  If a good cold night occurs to night, skating will be in order tomorrow.”

“The skating rink affords lots of fun as well as ample opportunity for exercise to those who enjoy the gliding art.  Some of the performances are anything but graceful and occasionally the acute angles of the human machine do not feel as free from pain after as before skating; but it all affords lots of sport for the crowed (sic).  The county Coroner last evening exhibited his dexterity in that line, but rather likes skating but not the coming down part of it, he thinks if he had a feather bed handy every time he had to set down it would be much more agreeable.”

“Last night at the skating rink there was a jolly crowd enjoying themselves.  It is believed that Johnny Klinefelter can fall down and get up oftener in a minute than any man in town.”

“The proprietors of the Skating Rink are at work sewing together the strips of what was the big tent, they hope to get it up for business to night.”

By the time prospectors discovered gold in Summit County in 1859, skiing had proven itself to be the most efficient mode of personal transportation in mountainous terrain.  In the mid-1800s, men referred to their skis as snowshoes.  What we call snowshoes, they called Indian feet or webs.

Men used their snowshoes (skis) and their webs to deliver the mail, check trap lines, and travel between mining towns and camps in heavy snow.  They used their webs to climb steep hills while carrying their skis (snowshoes) on their backs; they switched to glide down the hill.   Skis generally measured 10 to 12 feet in length.  People carried one sturdy pole that they dragged behind them to steer, like a rudder on a boat.   To stop, skiers placed the pole between their legs and sat down on it.

Eli Fletcher of Breckenridge made skis for his friends using native spruce or pine, ash, oak or Texas pine.  He and his friends preferred Texas pine skis as they were the fastest skis and required no waxing.

Skiing evolved into a recreational activity enjoyed by men and many women, who faced an extra challenge steering and stopping because of their long skirts.

Ski jumping became the rage after the turn of the century.  Peter Prestrud, a Norwegian living in Frisco, introduced ski jumping to the county in 1910.  The thin atmosphere at 9,000 feet helped the “flyers” achieve great distances on their jumps.  On the Dillon ski jump, the largest in the county, Anders Haugen, another Norwegian, set a world record in 1919 with a distance of 213 feet.  A year later, he broke his own record with a jump of 214 feet.  People traveled for miles to see the competitions.  Many smaller jumps appeared around Breckenridge, providing hours of entertainment for young and some not-so-young men.

Men and women enjoyed fishing trips and participated in hunting excursions.  Ernest Conrad, George Watson, and Daniel Wesley Fall traveled beyond Steamboat Springs where they said the hunting was “immense.”  They shared “a generous slice of their visible supply of deer and elk meat” with the newspaper editor when they returned.

Sam Blair, the first marshal of Breckenridge, found fishing more important on occasion than his official duties.  A man accused of high grading (stealing gold) had been released from jail with the understanding that he would appear the following Saturday to face a jury.  At the appointed hour, Sam Blair did not appear.  Neither did the prosecuting attorney or his deputy.  Court officials explained that Blair found the call of the fish too strong to “fool away his time conducting court.”

Excursions on foot and by carriage enjoyed popularity summer and winter.  “A pleasant party of ladies and gentlemen of this city yesterday went up Kokomo trail to top of Ten Mile range and then went to top of peak No. 8 where Kokomo, Robinson, Recen, and Wheeler and Mount of Holly (sic) Cross could be seen . . . A game at snow ball was enjoyed on top of the mountain.”

Sometimes excursions ended disastrously:  Mrs. Maggie Blair and some women companions went on a huckleberry-picking trip to the Swan River.  She and another friend, thrown from the wagon, fell into a narrow rocky ditch and sustained severe injuries.

Cycling clubs sponsored excursions for men, women, and children.  The groups rode throughout the country, sometimes stopping to enjoy a picnic along the way.  At holidays, groups and individuals decorated their bicycles to celebrate the event.

After the turn of the century, baseball commanded the interest of many in the county, soon becoming the most popular summertime sport.  “The attention of all interested in the formation of a base ball (sic) club is called to the fact that there will be a practice at the game grounds in Illinois Park to-morrow evening, everybody is invited to attend.”

Teams from Dillon, Montezuma, Breckenridge, Slate Creek, and Frisco traveled throughout the county and across county lines to Alma for games.  The newspaper reported in great detail–pitch by pitch, inning by inning.  Large crowds cheered for their favorite team while the Breckenridge Band entertained the spectators.  At least one member of the band played on the Breckenridge baseball team.

Like most mining camps, Montezuma had its quota of “soiled doves.”  Dixie, who operated a prosperous establishment in town, loved baseball.  According to Elizabeth Rice Roller, “When the team from a neighboring town met the home nine on the rough diamond near the schoolhouse, no one objected when she attended in her colorful finery and, keeping to herself at one end of the rough board grand stand, she rooted heartily for the home team. “

Despite all the enthusiasm for sports and recreation, not everyone appreciated the attempts to “recreate” in the streets of town.  The newspaper editor noted that football in the streets “was all the rage.”  A day later, he wrote:  “Pitching quoits and playing foot-ball in the streets is objected to by some of the more staid citizens; correct.”

Those “staid citizens” preferred other methods of recreation.  Social clubs played an important role in their lives.  The list of clubs covered all interests:  a Shakespeare, history, kitchen, women’s, bridge, thimble, and even a taffy club.  The newspaper included stories about the taffy club’s activities:  “The renowned, and great, and only Breckenridge Taffy club was pleasantly entertained Monday evening at the home of Mrs. Lena Filger, her bright and interesting daughters, the Misses Irma and Ilma Filger, dispensing lavish hospitality and sweetness to the members.”  In September, 1903, Lillie King hosted an “old fashioned taffy-pull” for her brother.

Members of the kitchen club could master the art of baking at high altitude while those in the thimble club improved their sewing skills.

Games played at card clubs included Euchre or whist–a forerunner of bridge.  Poker had its devotees.  Ernest Conrad, a Breckenridge marshal in 1887-1888, and his family belonged to the upper social class in Breckenridge.  On a Thursday evening in 1888, the Conrads joined friends for a social evening that included progressive high five, interspersed with music furnished by Miss Lillie Eberlein and Miss Audrey Ferris.  “Dainty refreshments followed the game of cards.”

Younger residents planned and hosted birthday parties.  “Last evening a party consisting of about a score of young misses late school mates of Miss Addie MIckel, suprised (sic) that young lady by an unexpected birthday call . . . the event was an enjoyable one for all present, the evening was spent in appropriate past-times, games, dancing, singing, etc.”

Glee clubs entertained guests. Not only women participated.  The Breckenridge Männerchor (Men’s Choir) organized in 1881 with Henry Yust as conductor.  Peter Engle, the principal tenor, co-owned with his brother the Engle Brothers saloon.  In 1886, the newspaper editor noted that the Teutonia Leiderkranz (the word means wreath in German) “is making creditable headway and soon will be able to rank as one of the best singing societies in the state.”

In 1883, the many Pennsylvanians living in the areaformed a social cub.  “The Pennsylvanians of Breckenridge and Vicinity are respectfully invited to meet at the Grand Central Hotel on Saturday next for the purpose of organizing a social club.”  The Pioneers Club included men and women who had arrived in town prior to 1860.

With the arrival of women in the early 1880s, dancing became a popular activity.   “Proper” women attended dances at lodges and clubs with only invited guests; they never attended those held in saloons.

Probably some of the most important social events held in Breckenridge each year were the balls sponsored by various social and fraternal organizations.  It didn’t take much to decide to hold one.  The group found a room, hired the musicians, and prepared the food.  While many welcomed the diversion, some ministers considered the balls to be one of the devil’s favorite ways of ruining their efforts to bring religion to a camp.

At a costume ball in 1887, the reporter listed 48 attendees and their costumes.  Among them were a sailor girl, queen, several characters from Gilbert and Sullivan operettas, gypsy queen, tambourine girl, Goddess of Liberty, clown, Henry IV, Spanish cavalier, and George Washington.

One of the costumes particularly interested the reporter:  “The only local hit made in the characters taken was that in which the Daily Journal was personated by our charming townslady Mrs. Robert Hamilton.  Her dress and head covering was (sic) made entirely of copies of the little Daily . . . As an original idea the character was the most successful in the ball, and for the compliment the Daily Journal desires to return to its fair representative its most heartfelt thanks.”

Even with all the recreational opportunities available, men could still choose to “recreate” at their favorite saloon.  They didn’t have to walk far from one saloon to another to enjoy a wide variety of drinks, gambling, and fellowship.